Sarah Reinagel, of Williamsburg, and Eric Ott, of Richmond, were married on June 2, 2018 at St. Olaf Catholic Church in Williamsburg and hosted their beautiful reception at the Vineyard Estates.

The couple met at a Thanksgiving potluck held among friends in the Catholic Student Ministry during their second year at the University of Virginia. They hadn't spent much time together before this, however things would all change after Eric showed up to the potluck with a large, roasted turkey that became the topic of conversation. Sarah recalled that as the group sat around a huge table to eat this great-smelling turkey, Eric began to share a great story about all of the disasters that he (and the turkey) overcame to make it to the party. Sarah said, "Eric proceeded to expound upon the most elaborate turkey disaster story anyone had ever heard." Next thing you know, they struck up a conversation and went on their first date soon after this evening. They marked the beginning of their love story with a night of ice skating on Charlottesville's Downtown Mall and watching Sarah's favorite movie, "Tangled."

Fast forward three years later to February 2, 2017, when the couple had special plans to celebrate their third dating anniversary in Charlottesville. Before going out to lunch, they made a surprise pit stop at their favorite spot in the city, IX Art Park. This park has a mural that is painted with the words, "Before I die..." with space for people to fill in their desires and wishes that they want to fulfill before they die. Eric had a surprise in store for Sarah and went to the park before his early morning class to write on the wall, "Spend my life with Sarah Reinagel." He brought Sarah to this spot and got down on one knee. Sarah said, "The rest is history!"

Next came the wedding planning. The couple knew they wanted to use bright colors and consulted Pinterest, as well as Lowe's for paint swatches to look at and compare different color schemes. We loved tying the pink roses, daisies and royal blue together.

When asked about a special story or memory from their special day, Sarah recalled the pouring rain that started during their commute from the church to the reception venue. She said, "I got out of the limo and had two different people holding umbrellas for me with my dress hiked up as much as I could get it. I traversed the path to get under cover to take pictures and look at the groomsmen and all of them have a line on their suits of the top half being dry and the bottom being soaked. At the same time, people's phones were going off with flood warnings. One of my bridesmaids turned to me and said, 'Well. This is certainly memorable' with a huge smile on her face."

Despite the rain, the couple had a wonderful, memorable celebration filled with so much love and laughter. Congratulations Sarah and Eric! We loved being a part of your special day. Enjoy these beautiful photos of Sarah and Eric's special day by S.M.Kodres Photography. 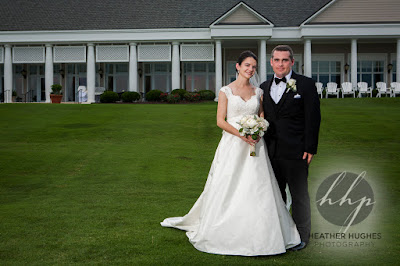 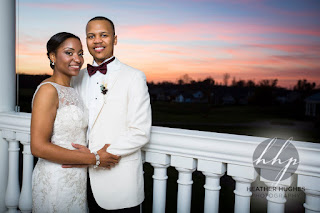